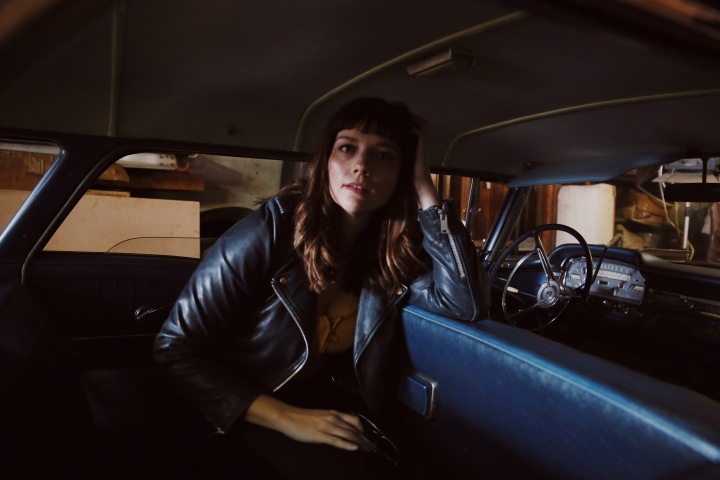 New York-based independent singer and songwriter, Lesley Barth, drops her second full-length album Big Time Baby on May 15. In this interview Barth talks about a duet she did with her husband, how she agreed to the location for her cover shoot sight unseen, and how she hopes her ten-track album will inspire you.

Big Time Baby comes on the heels of the two-year anniversary of the day Barth quit her day job in corporate America to focus on music full-time. Talk about timing!

It was March 2018 that Barth made the courageous leap from employee to full-time indie artist.

“I wrote this album during the process of completely uprooting my life, and recorded it as I was still navigating a life without structure and regular paychecks.”

“It’s an album for these uncertain times where many people feel their lives have been stripped to the bone, they’ve woken up from a daydream, and they weren’t sure what tomorrow would bring because that’s where I felt I was when I wrote it. Almost all the savings I had for quitting my job got wiped away by healthcare costs, and I had to scramble.”

Barth has a powerful voice and a rare ability to convey raw feelings in a way very few can.

It doesn’t matter whether she’s singing an upbeat, laid-back song about summer and romance, or a song about depression as she does in Something Good (the last track on Big Time Baby), Lesley Barth connects with the human emotion.

As such, Barth has garnered comparisons to music legends Carole King and Cat Stevens.

So let’s kick this interview off with the amazing photography on this album. Was it your creative inspiration behind the look and feel? Where did you shoot the pictures?

The photo shoot for this album (primarily) took place at the South Philly Van Club. I hadn’t even seen pictures of the place before we got there but I couldn’t imagine a better place to shoot.

The photographer, Harish Pathak, is one of my best friends from high school, which makes it very easy for me to be myself in front of the camera.

I love the smell of working garages, because my grandfather was a mechanic with a tiny one car garage out back where he worked on an old Ford of his, and I have such warm and fuzzy memories of my time at their house.

We definitely wanted to capture some of the 70’s and to be a little theatrical since a lot of the songs on the album are like monologues.

This garage [the South Philly Van Club] restores vintage vans and station wagons. It felt like the perfect backdrop.

What does Big Time Baby mean to you?

Big Time Baby is a lyric taken from the opening track, Lower Eastside. It’s a tongue-in-cheek title that reminds me not to take things so seriously. It’s sort of shorthand, for me, for there is no ‘big time or small time” there’s just your life.

I take long walks by myself, sing into voice memos. Whatever snippets stick with me I work those up.

Was your writing process different with this album than that of Green Hearts?

Not too different. I did write more on guitar with this record. The biggest difference is probably in how many songs I wrote for this record. Way more songs didn’t make the cut this time around–which is a good thing.

Your husband (Chuck Ramsey) performed with you on the song Preacher. Was there something about that song in particular that motivated you to work with him?

Preacher was such a fun song to track! Never have I felt cooler recording vocals. During a pre-production meeting with, Joe Michelini, (co-produced this album with me), suggested I try it as a duet. It wasn’t initially that way. I had sort of thought of the same thing but was afraid it would be too cheesy.

But we just leaned all the way in on the duet vibe, which was fun. Chuck has more of a pop/rock voice which was really energizing for this track. That might be as close as I ever get to being a rocker.

And, of course, it’s fun working on something with your husband. You just have a natural way of relating that I think really works on a song like this.

One of my favorite songs on this album is Up in The Air. What was your inspiration for it?

Thanks, yeah. I think it’s super relevant these days in particular. No one knows what’s coming next and what the future will look like.

The inspiration was just my life at the time I wrote it—feeling stuck having quit my job but not able to see the road ahead very clearly.

I wrote this one really quickly and set it aside for a few weeks and when I came back to it I thought… this is good. Who wrote this? (laugh) I had sort of forgotten I wrote it but it said everything I had been wanting to say.

I’m glad it’s a favorite of yours. It feels good to share this sentiment, right now, in a way that I obliviously, never expected.

The last time we talked was in 2018 shortly after you quit your job. Here you are two years later and two full-length albums behind you. That sounds like success to me, but, how do you feel things are going? Do you have any regrets about quitting your job?

Thank you! My last and first album Green Hearts came out in 2017. I’ve been chomping at the bits to do another one. I am happy with what I’ve done, where I am and I have absolutely zero regrets about quitting my job.

But man, I have to be careful with the word ‘success.’ I feel like that word has too much power for me. Like, if I’m not successful in the way I want to be, I’m a total failure.

Maybe that’s not what it is— I don’t think success and failure are total opposites. I think I’m learning they are much more interconnected than I realized, before.

I’m just trying to focus on making music. That’s my vocation, as I see it.

What do you want people to know about this album?

I think what I want people to come away with is the idea that you can’t live your life and perform your life at the same time.

It’s really easy to perform, today, because of social media and the internet. And there is great danger in everyone changing who they are in response to some sort of weird market-testing of your own community.

Amen to that Lesley!

Thank you for allowing me to share you, once again, with my friends, here. And the way I see it, if you have figured that out, and you stick with it no matter how much money or fame you acquire in your lifetime, you will have cornered your definition of happiness.

Lesley’s single, “Woman Looking Back at Me” is out now. It’s a song that draws attention to the internal negative dialogue we all experienced (as women) at some time or another.

If you want to learn more about Lesley, follow her in social media or support her Patreon you can find her below:

Your home should make you feel happy on the inside even on the bad or unthinkable days.